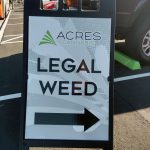 I like to witness historic events in Las Vegas. Among many momentous occasions, I helped christen the new Aladdin (now Planet Hollywood). I was on hand when the Stardust fell down, and I observed as the La Concha Motel dangled into place to become the new lobby for the Neon Museum. I now lay claim to yet another “I was there.” I braved the heat on July first to attend the One Love Cannabis Celebration & Community Jam at Acres Cannabis. 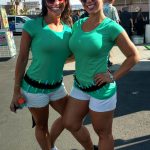 After receiving my “over 21” wristband, I was greeted by two lovelies wearing bandolier-style belts loaded with what looked like ball-point pens. With their guidance, I soon found myself taking a vaporous watermelon-flavored hit on one of their wares. In doing so, I joined hundreds of other attendees and people all over Nevada legally indulging in recreational THC for the first time.

Is legal THC any different from the outlaw kind? I must leave it to others to answer that question, because, aside from a few experimental ingestions quite a long time ago, I really don’t know much about cannabis. Back in the day, you either smoked it or ate it. If you smoked it, you announced to everyone nearby exactly what you were doing. Eating it was more inconspicuous, but the weed had to be baked into something powerful enough to mask the flavor. Brownies earned a certain reputation.

Legality is a significant and easily pinpointed change, as the legions attending the Acres celebration attest. But there’s a lot more to the evolution of cannabis use than its new above-board status in Nevada. As I spoke with Acres Cannabis partner John Mueller, I got a glimpse of what’s already happening on the weed market as well as what’s in store.

The campus of Acres Cannabis already includes a dispensary, a kitchen, and a large “grow” facility. In the works is The American Museum of Cannabis History, which will include artifacts, art, and exhibits illustrating marijuana’s role, status, and influence over the decades.

“There’ll be a drug tunnel,” he said, “and an old VW flower-power bus available for selfies.”

Later, I spoke with Ahmad Islam, founding advisory board member of MEZZ Brands, which handles branding and publicity for Acres Cannabis. He was wearing a T-shirt emblazoned with “No Stems No Seeds.” 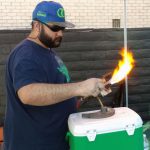 “I was wearing this at an airport,” he said. “A woman in her seventies came up to me and said, ‘Love your shirt.’”

I had already noticed the diversity of the attendees at the event. Most were in their twenties and thirties, but a significant number were well over that. People of all ethnicities browsed booths selling art, accessories, and bongs. A glass blower, undaunted by the heat, deftly created a pipe while we watched. 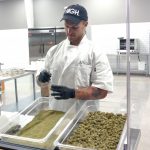 Inside, we observed a young man fashioning joints through the large glass windows of the kitchen. Nearby, other Acres employees were making “edibles.” You’re thinking brownies, right? Not a one to be seen. These would fit in well at a fancy French patisserie.

Weed has become legal at the same time that it’s gone upmarket. No longer need marijuana users worry about lingering odors or suffer the repercussions of spilling bong water on a carpet. “No stems no seeds” is only the beginning. Bongs and joints are optional, too. Vapes, oils, and dainty sweets are the fresh, new, discreet THC delivery systems. 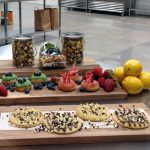 Will this new wave of cannabis innovation combined with its new legality reel me in as a customer? Probably not, but I am happy for those who have been forced to operate in the shadows all these years. Whether they’re using it for medical purposes or recreation, it’s high time (heh, heh) that marijuana be relieved of its power to turn responsible consumers into felons.

Now we get to see which Nevadans it turns into tax-paying billionaires.