The piggy bank pictured above is not large, not beautiful, and not even serviceable. The slot on its back intended to accept coins is too narrow. It wasn’t too narrow when I bought the pig many years ago in the central market in San José, Costa Rica. I was grocery shopping with my mother, which sounds like a mundane task, but in that huge and bustling market, it was anything but. In addition to heaps of bananas, piles of papayas, baskets of green coconuts, women making tortillas, and men whacking up sides of freshly slaughtered beef, there were parrots and monkeys and fish. The smells ran the gamut from disgusting (the beef) to sublime: fresh hot tortillas wrapped in banana leaves. I never missed a chance to go to the market, and I always took my allowance. I usually spent it on candy, but one day I chose this little pig instead.

“You know what happens to pigs like that, don’t you?” my mother asked me.

“You fill them with coins?” I said.

“Take them out and buy something!”

“Turn the pig over,” Mom said.

I did, expecting to find a plugged hole on its underside, like every other piggy bank I’d ever seen. This pig’s belly was smooth. I stood there as realization dawned.

“Either that, or set him outside in the rain. He hasn’t been fired, so he would melt.”

I decided then and there that this little pig was not ever going to get fed or get wet. When I got home, I set him on a shelf and forgot about him until my mother, not long afterward, decided she wanted to take home a special kind of souvenir from Costa Rica. 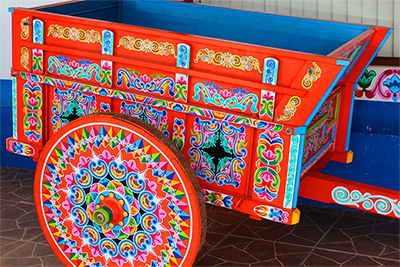 As anyone who has toured Costa Rica knows, the country takes pride in its famous painted oxcarts. My mother decided to hire one of the artists to paint oxcart designs on several pieces of furniture, including a headboard and a cabinet. I watched the man paint for a couple of days. It was mesmerizing to see bright floral and abstract designs flow from his brushes. Aside from a few pencil lines to keep things centered, he painted freehand.

The morning of his last day at our house, I pulled together my allowance money and asked the artist if he could work his magic on my pig. The man refused my coins, but he turned my pig into a work of art. It went back on its shelf, now a lovely shade of blue and decorated with bright red and orange flowers and curlicues.

My pig wore that beautiful exterior for the next thirty years, traveling with me back to the United States, through high school, college, and a trainer marriage. He stayed safely in storage while I lived in Europe, and reemerged when I married again. My well-traveled little pig had already survived a lot, but his real test was yet to come.

In late October, 1993, Santa Ana winds turned a campfire on a southern California hillside into a raging firestorm. The house I shared with my new husband was one of hundreds to burn. When we returned to the smoking remains the next day, it was obvious that nothing much had survived. When things cooled down enough, we sifted through the ashes. This little pig was one of the few items that emerged intact from the conflagration.

It’s no longer a lovely example of Costa Rican oxcart painting. It’s just a little discolored clay piggy bank whose slot is too narrow to accept any currently minted coins. If someone else had been sifting through the remains of my home, this little piggy would not have been worth a second look.

Since I know his story, here’s what I think he’d like us to know:

4 thoughts to “This Little Piggy”