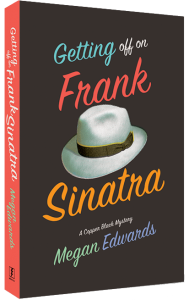 A scorching Las Vegas summer is about to get even hotter.

Aspiring journalist Copper Black has just found out that her boyfriend is responsible for his not-quite-ex-wife’s pregnancy. An unexpected house-sitting job at a notorious Las Vegas “party house” should provide not only a pool with a swim-up bar but also much-needed distraction.

While researching a story about an exclusive private school, Copper accidentally discovers the dead body of the school’s beloved founder. Now involved in a high-profile murder investigation, Copper turns to her brother, a civic-minded pastor who is overseeing the construction of a center for the homeless. A Paiute medicine man claims the site is a sacred burial ground, attracting hordes of protesters.

As she tries to solve the murder, help her brother, advance her career, and sort out her love life, Copper stirs up a world of trouble. Her escapades as she evades a sociopath, a disturbed cowgirl, and a suspicious homicide detective make Getting Off on Frank Sinatra a nonstop roller coaster of a read.

Praise for Getting off on Frank Sinatra

“Copper’s debut has enough pizzazz to make readers want to try just one more roll of the dice.”

“This is a novel that has action, drama, comedy, suspense, a few surprises and paints a colorful tapestry of modern Las Vegas.”

“‘Getting off on Frank Sinatra’ is a wild romp through Sin City through the eyes of the main character, Copper Black, who finds herself knee deep in a murder mystery.”

“With a narrative highlighted by light violence, and a fish-out-of-water protagonist stumbling over clues, Edwards’s “Getting Off on Frank Sinatra” proves to be a nimble beginning for this crime series.”

“From its sly title to its high-energy ending, Getting off on Frank Sinatra is a delightful romp rooted in Las Vegas’ intoxicating history. In this sunny crime drama, Edwards captures the fun of residing in the nation’s most improbable small town.”

— Laura McBride, author of We Are Called To Rise

“A must read for all mystery and crime novel readers, Megan Edwards’ new novel (is) “Getting off on Frank Sinatra.”

“Full of plot twists, historical and unknown facts about Las Vegas like the neon signs junk yard, “Getting off on Frank Sinatra” is an entertaining mystery that will have you chuckle and on edge.”

A zany, fun, action-packed tale that will keep you laughing and turning the pages. The magic of Las Vegas and its cast of characters are on full-display and will completely charm you. Getting off on Frank Sinatra is entertainment worthy of Sin City, America’s entertainment capital.”

“Megan Edwards views her adopted city with a journalist’s eye and an insider’s understanding of what makes us tick.”

“Megan Edwards spins a brilliant tale filled with sharp humor and characters who will lead you on a quintessential Vegas adventure. I cannot recommend it highly enough.”